Duck as Good as the Pâté

March 01, 2013
In November of last year I had the unbelievable good fortune to be invited to a talk by one of the people I respect most in the world. Rather a silly claim to make given that I had never met her before and, even now, have only exchanged a few words with her. Still, her books speak for. They speak to people around the world. And, for the purposes of this inevitably self-absorbed blog, they speak to me. I had the privilege and the pleasure of spending an evening with the inimitable, giant of literature Margaret Atwood. 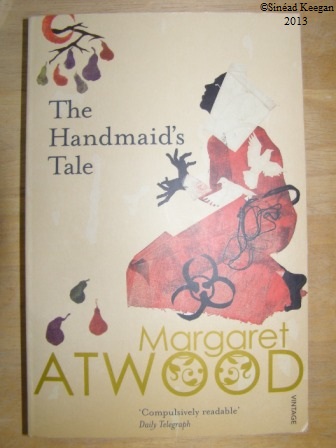 Yes, that's right, the one and only Margaret Atwood. Still, months later, the very act of typing, "I met Margaret Atwood" thrills me to my word and story-loving core.

All this is ironic given that Ms. Atwood is the writer who is often credited with the quoatation, "Wanting to meet an author because you like his work is like wanting to meet a duck because you like pâté." In her book Negotiating With the Dead: A Writer on Writing she says she "pinched" this from a magazine, but attribution aside, she seems to accept and agree with this statement. I, however, must respectfully disagree, because her literary pâté is divine, and she is also one hell of a duck. Finest I've met, in fact. Her talk was pithy, witty and just as enjoyable as any of her novels.

I must admit however, to feeling some nerves before the event. What if she wasn't as funny? As smart? As awe-inspiring as I expected? I can't say that I hadn't worked her up in my mind to a veritable Titan of writing. Of course, Ms. Atwood addresses this too, writing, "[The pate vs. duck comparison is] a light enough comment up on the disappointments of encountering the famous, or even the moderately well-known - they are always shorter and older and more ordinary that you expected."

Another admission: She was shorter than I expected. This was no disappointment, though. Look, I'm no giant myself and, while I'm quoting women I admire, my granny used to say, "Good goods come in small packages."

She wasn't older than I expected or at least she didn't admit to having lied about her age previously. I also suspect that Margaret Atwood is among the class of women who don't feel any shame in admitting their age. It seems more likely, though, that she was talking about your idols appearing older, rather than actually turning out to have different, earlier birthdays than you expected. She didn't. She looked just like the photos you see of her and, to be honest, I've never really thought much about her age. I don't think much about the age of many authors. It seems fairly irrelevant. Good writing is good writing and age doesn't determine that.

And of course, she was anything but ordinary. Her talk was amazing and filled with her trademark humour and intelligence. I was struck by how strongly her voice comes through in her fiction. Hearing her speak felt like listening to an old friend because it was like reading a novel. Hers is the voice I heard when I open the pages of her books. Clear, considered, brave, intelligent, lyrical, beautiful, strong, funny at times, poignant and sad at others and always fearless. There are countless other adjectives I could add, but this post is probably already tending just a little too much toward hero worship so I'll move on.

I can't pick a highlight of the night, but it sure was exciting to get to ask her a question about the role of social media in writing and where she saw that going. This is the woman who, in 1985, wrote about the US in the near future controlling women's reproductive rights (The Handmaid's Tale) twenty years before Paul Ryan and his cronies; and in 2009, wrote about a fast food chain selling "secret burgers" made of surprise meat (The Year of the Flood) 4 years before we found out most of us can't tell our stall-fed beef from horse. Asking her about her vision of writing's future in social media? Yep, that was pretty neat.

In good news, she doesn't see the end of the physical book anytime very soon. But she was also quite clear that she doesn't "predict" anything. To be fair to her and to give her all due credit, she probably doesn't. Prediction has an air of unknowing about it, some guesswork mixed in with a bit of luck and some crossed fingers. What she does is research, think and understand. Surely that mixed with some imagination and a compelling story is better than prediction any day. 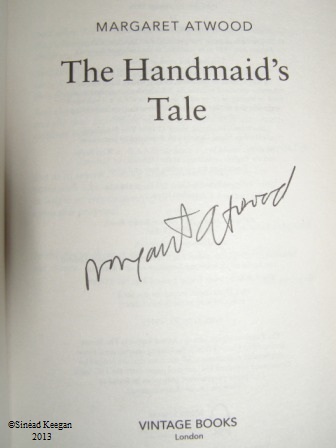 The signed book was also thrilling. She made her way quietly and efficiently down a long line of adoring fans thrusting books at her. She was polite and engaging but impressive in her ability to keep moving without causing offense. A true pro and the embodiment of the best of Canada: witty, smart, considerate, liberal and not afraid to push a boundary or two.

I think I shall now go cower in the corner and hope that Margaret Atwood never discovers that I have described her as "one hell of a duck" however true it may be.