The Sights and Gardens of Seville

July 20, 2012
Lest you all think that all we did was munch on tapas in Seville, we didn't we also enjoyed what has been called the most beautiful city in Spain. It's gorgeous. Soaring Moorish architecture, orange trees lining the streets (where did you thing Seville oranges came from?) and lots of pedestrian and bicycle friendly streets. We had a wonderful, if scorchingly hot, three-ish days wandering around the city. It's infinitely walkable and all the street side cafes make for amazing people watching. But you know all about the food and drink from this post and about the people watching we did from this one, so I'll spare you the repetition. Instead, I'll tell you all about the life of Seville, which it has in abundance. Just not in the late afternoon, when the tourists are the only people silly enough to be dragging themselves around in the blistering heat.


If you're on a cathedral tour or thinking about going on one then I insist that you add Seville's Catedral de Santa María de la Sede. Even if you aren't considering an exclusively places of worship tour, you shouldn't miss this joint. First, it's enormous. We thought we had seen the inside, but it turned out we had just seen a chapel, but it was the size of a respectable church anywhere. We only realized this when we happened to walk past the ticket selling entrance to the main part of the building. In hindsight, the fact that there was a net strung about our heads to catch the pieces of the molded ceiling that were falling ought to have been a pretty big clue. Perhaps the bigger clue ought to have been when we couldn't find Christopher Columbus's tomb. The Catholic Church just doesn't forget to signpost a money-maker like that.

A hefty entrance fee later we were wandering through and getting lost in the absolutely cavernous interior of the cathedral proper. It was some kind of impressive, though, and the entrance fee clearly goes to some serious upkeep. No falling ceilings there and plenty of gilding to keep shining. And Columbus's tomb? Well it's hard to miss, not just because there are tons of tourists taking macabre photos of it, but also because there are four giant statues holding it aloft. Note to my admirers - I wouldn't be adverse to being held aloft for all eternity, but make the statues a tad more cheerful.

There's the obligatory bell tower, called la Giralda, and, as we love a good view, we climbed it. While the view of Seville is beautiful, this tower is worth going up for the climb itself. What? I hear you exclaim. Yes, the climb is really cool. So, the people who were hauling their poor granny up it, were probably somewhat misguided, but if you're not an octogenarian and generally in good health, this is the tower to climb. You see, there are no stairs. There are instead 35 ramps. Fine, there are a couple of steps at the very end, but only a couple. 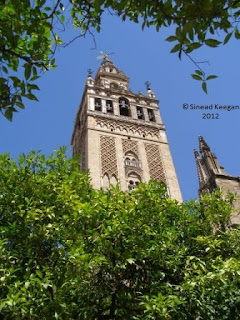 This brings us to the fascinating history of the cathedral, which is really the history of Seville. The cathedral was originally built as a mosque and this was the minaret. It was designed with ramps instead of stairs so that the muezzin could ride his horse up to the top to call the city to prayer. When Seville was conquered by Christians in the 13th century, the Moors wanted to tear down the minaret, it was so revered, but King Alfonso X threatened to put them all to death if they did. And so the Christians added to the top of the minaret, but the base remained and is still strikingly beautiful today. They also retained several other original features when they built their gothic cathedral on top of the mosque. My favorite (beside the horse-friendly tower) was the courtyard filled with orange trees.

I have to admit that I thought, from the descriptions that it would be much bigger than it is, but perhaps my spacial awareness was just thrown for a loop by the enormity of the cathedral, because, in my memory, it seems larger than I remember feeling it was at the time. Regardless of size, it's a very quiet spot to spend a few moments at the end of day of sightseeing. Shaded benches provide the perfect spots to sit back, have a drink of water and admire the perfectly geometric placement of the orange trees in the brick courtyard. If you do decide to have a wander, be careful, though, because there are narrow channels running across the brickwork to irrigate the trees. There was water in the gently gurgling fountains, but not in the irrigation system when we were there, but still, it didn't disappoint.
I say it was a lovely spot to end a day of sight seeing, but we didn't finish then. From there we headed over to the Alcázar, a Moorish palace with very, very extensive gardens. So extensive that I don't think we saw half of them in the couple of hours we spent wandering. Now that may have been due in no small part to the fact that I collapsed in a moaning heap halfway through and had to be revived with a sit down in the Poet's Garden with several bottles of water. Did I mention it was unbelievably hot and we had just come from the slightly chilly and very damp Inis Oirr? Well it was and we had. And I didn't handle the transition quite as well as the other half. I tend to think and to announce to anyone who will listen that I love hot weather. But if I ever say this to you, you now know that I am a liar. I think that I love hot weather, but I am a truly northern European girl: I think that mid to high 20sC or 70s to 80s F is hot. Anything above that and I'm dehydrating at an alarming rate as my insides melt. Don't worry, though, you'll know all about it if you're ever with me in the heat. I'm very vocal.

So downside was the heat and my moaning. Upside was I got fifteen minutes in the Poet's Garden. Although I have to say, it wasn't nearly the most inspiring part of the gardens, in fact, it was the least inspiring. Why would I go sit in an over-manicured English garden in Spain, when I could be sitting by spout of water that drops two stories in front of a vine with fuchsia flowers growing wild along a very romantic little covered walkway to nowhere. Now that's a spot to write. Never mind about that, though, as it just seems mean to the English, who had nothing to do with that particular Poet's Garden anyhow.

Eventually, I stopped moaning and really enjoyed exploring the rest of the palace, which is really large and filled with passages that take you unexpected places and land you into what seems like an endless series of tiled rooms, courtyards and balconies. Alcázar is a magical spot and it's no wonder that it's still inhabited by the royal family. I wouldn't ever want to leave and we were both sorry we had come at the end of the day. No doubt it was quieter coming after 5pm, but we would have liked more time to enjoy the gardens and the peace of the place.

Ah, but time marches on and by 7pm it was definitely time for tapas.